Everyone who has been following China mobile game market should know it by now: Your game can’t enter the world’s largest market without first acquiring the game publishing license, aka ISBN approval, issued by the Chinese industry regulatory body NAPP. This has been the case for the Android market since 2017, but from July 1st, 2020 onwards Apple has also been forced follow the regulation and require proof of ISBN for any game that involves end-user payment (IAP and pay per download). Speaking to lot of western game developers and publishers, I’ve realised that there are several of key points about the China ISBN rules and regulations that are almost always overlooked or misunderstood.

Who can apply for ISBN?

There are two roles involved in the ISBN application and the final certificate that you need to understand:

The Game Publisher and Game Operator can be one and the same company or two different companies. This might be a little bit confusing, but the Game Operator here is actually referring to the publishing entity who is responsible for the game’s distribution and operation (whom you would normally call ‘publisher’). Companies with Internet Content Provider (ICP) license qualify for the Game Operator role. The Game Publisher on the other hand is not necessarily involved in the actual publishing and the operation of the game at all. The Game Publisher in this context is an entity with Internet Publishing License, i.e. company who has been entrusted by the regulator to understand and follow the self-censorship requirements to publish content online. No foreign companies nor their China subsidiaries nor Sino-foreign joint ventures are qualified to get these business licenses and thus can not apply or hold ISBN by themselves - The only way to get ISBN is to license your game’s China publishing rights to a local publisher.

Before going into ISBN Agencies though, lets first understand on high level how the application process works. The Internet Publishing License holders will submit their ISBN applications to their home province’s provincial level NAPP bureau. After the game has passed the Provincial Bureau’s review, the Provincial Bureau will pass it on to the Central Bureau in Beijing for final review and approval.

Now to the ISBN Agencies: They are state owned or privatised publishing houses with Internet Publishing License, who have been appointed to help game developers/publishers to apply for ISBN. They are companies who don’t have any game publishing business themselves and their role is simply to help game developers/publishers to comply with the regulation and apply the ISBN. Aside from applying for the ISBN, they don’t intervene in the actual publishing of the game in any way. Typically each Chinese province has number of ISBN Agencies whom developers/publishers can use to apply for ISBN and majority of the ISBN approvals are indeed applied through and issued for these companies. In fact, many of the bigger publishers who hold their own Internet Publishing License are still using these Agencies to apply ISBN, in order to enhance their chances of getting multiple approvals faster through several provinces. 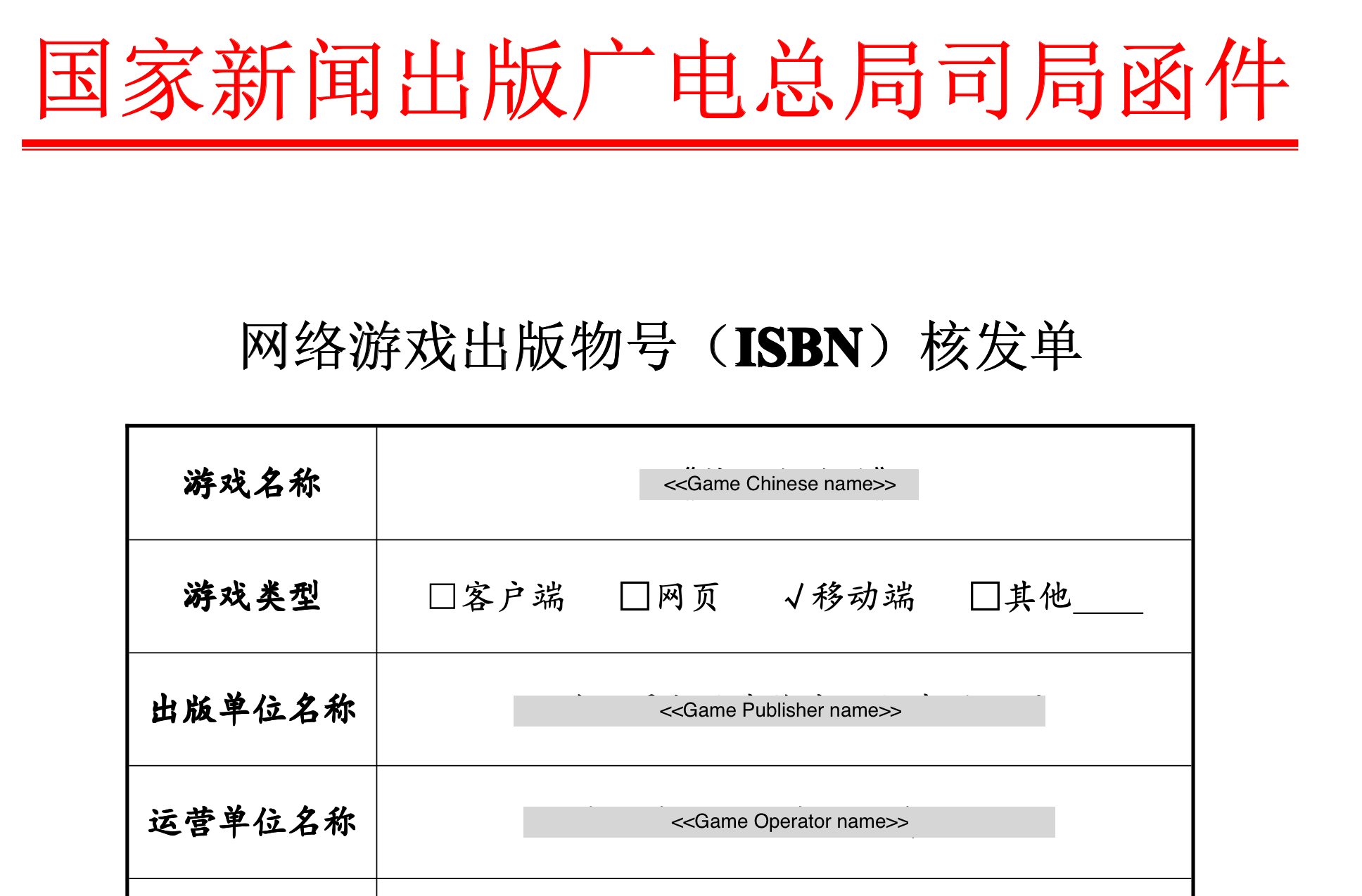 Foreign game ISBN certificate includes the game Chinese name and the Game Publisher and the Game Operator company names, but not the original developer / IP owner’s name or the game original language name.

How long it takes and can relationship help?

Every Chinese publisher who has been in the business for long enough can tell you that they have secured ISBN in three months, because that used to be the case in the early days. However that is not the case anymore and foreign game ISBN handling has since 2018 been extremely slow and you should be mentally prepared for 12-18 months wait if you submit your application now. For domestic games though the queue seems to move faster and there are few provinces with fast lane policies where games can get the approval in around 6 months. With this long waiting time and the famously relationship-based Chinese business culture, many are asking if a close government relationship or other special ‘guanxi’ can help to get pass faster? The short answer is no, not for foreign games at least. Don’t just take my word for it - look at the examples like Tencent-owned Supercell’s Brawl Stars, which has now finally (and very successfully) been launched in China after some 1.5 years ISBN wait. The best way to get ISBN sooner is to start your application early on and to make sure it is content and feature wise 100% compliant with the regulation.

No expiry, no transfer

Here are the four most crucial facts about ISBN that foreign companies often miss:

What this means is that you’re not only married to the Game Operator, but you’re married with kids and walking away from that relationship is more than just complicated. In practise, there are several important scenarios you need to consider (and you need to make sure your contract lawyer understands):

Modern f2p games are ever-evolving services and it’s ok for you to keep developing your game with new content and features during the ISBN application, as long as you make sure it complies with regulations. However, one thing must be fixed at the very beginning and can not be modified later: Your game’s Chinese name. The ISBN is applied for the China version of your game, with the Chinese name, and the name displayed in App Store listing must match the one on your ISBN certificate. As game developers are typically accustomed to freedom of changing the game name several times during the development and soft launch or even after hard launch, two things here require attention:

And that’s it. At MyGamez, we always want to operate with clear and transparent business terms that are fair for both parties and I hope that this article managed to equip you with some valuable ISBN related business details. Lets be in touch!

Should you consider publishing your mobile game in China?

China is back in business with new batch of game approvals!

Key Points You Need to Understand About China's New Regulations